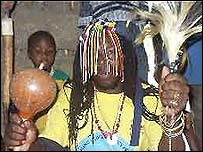 NIGERIA – A man and a woman, were yesterday sentenced to 2 years imprisonment over an alleged bewitching of a woman by the Chief Magistrate’s Court in Warji Local Government Area of Bauchi State.

Ibrahim Shehu Ganye, a 43 year-old man and Adama Mamuda, a 45 year-old woman, were both accused of casting a witchcraft spell on one Hansatu Sani four years contrary to Section 216 of the Penal Code.

The accused persons, who admitted committing the offence, were ordered by the court to return their victim’s ‘‘spirit,’’ which they reportedly held illegally for the period their victim was under their spell. They were also asked to pay the bewitched woman N100,000 as damages for the sufferings and trauma she went through, and an additional N 10, 000 each as fine.

Police Prosecutor, Mato Albasu, who had earlier charged the accused for conspiring and bewitching their victim by witchcraft, had kept Sani under observation for a week to ensure that she recovered after the said spirit was returned to her.

Magistrate of the court sitting, warned the convicts of such inhumane acts and advised them to desist from such in the interest of peace in the area.